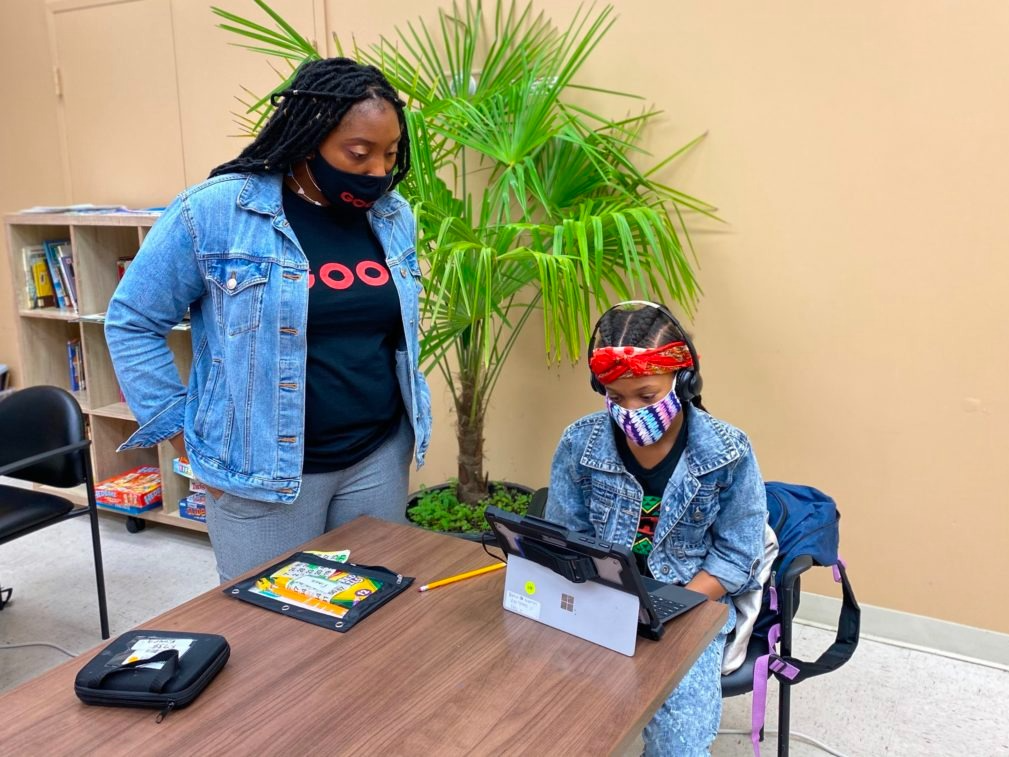 Kimoriah Warren, 9, logs on for distance learning with help from Malika Williams, the lead teaching assistant at GOODProjects.

Students sat two to a table, separated by plexiglass and wearing face masks.

An 11-year-old girl took a math test on decimals. A nine-year-old boy solved a word problem that directed him to calculate the attendance size of the Super Bowl. His seven-year-old sister doodled in a notebook during a break from her virtual second-grade class.

The students are part of a learning hub inside the Greenleaf Gardens Apartments, a 493-unit public housing community in Southwest D.C. Worried that students were falling behind academically after the coronavirus pandemic forced most classes online for the city’s schoolchildren, residents at Greenleaf and other public housing developments approached the non-profit GOODProjects about creating the hub, said Darius Baxter, the organization’s founder.

“Although kids are online, a lot of times they’re just looking at the screen, not necessarily learning or gathering the information,” said Baxter.

It’s unclear when public school children in the District will start returning to physical classrooms in large numbers. Some charter schools are providing in-person learning for small groups of students. D.C. Public Schools halted plans to bring up to 21,000 elementary school students back to buildings after fierce pushback from teachers, principals and families.

City officials and educators worry the time away from physical classrooms will widen achievement gaps between different groups of students. Fewer students in kindergarten through second grade in D.C. Public Schools are meeting early literacy benchmarks, according to data from the school system, with Black and Latino students falling behind faster than their white peers.

The Greenleaf hub, which educates 22 students and operates from 8 a.m. to 4:30 p.m. on school days, may be one of the only opportunities for students to spend time in anything close to a classroom setting this academic year. Baxter said many of the parents who send their children to the learning would not allow them to return to in-person classes during the coronavirus pandemic, even if they had the option.

Many of the students or their family members have pre-existing health conditions such as asthma, which could put them at greater risk of becoming severely ill by COVID-19, the disease caused by the coronavirus, Baxter said. Some students live in multi-generational homes and fear infecting older relatives.

“We’re locked in for the long haul,” he said. “We’ll be here until the end of the school year.”

Baxter’s non-profit is dedicated to lifting families out of poverty. During the pandemic, Baxter said the organization could not address families’ needs without helping them through distance learning.

Wealthy families have formed education pods and hired private tutors to bolster learning during the pandemic. Baxter said he wanted to provide similar opportunities to families in the city’s public housing communities, which provide affordable housing to low-income families. 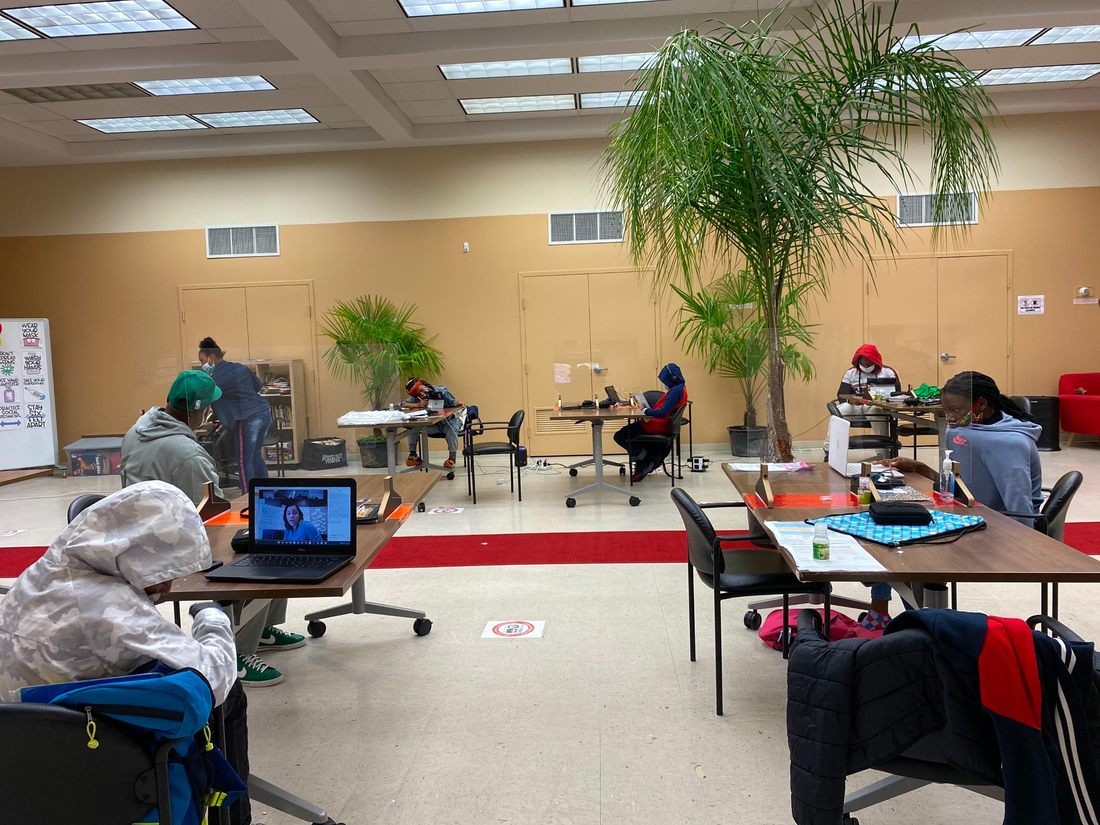 The learning hub inside the Greenleaf Gardens Apartment was decorated with palm trees and a red carpet.

Parent Yolanda Atkins said she trusts the learning hub more than D.C. Public Schools, where two of her children are enrolled at Amidon-Bowen Elementary. Atkins said her children were invited back for in-person learning before the school system delayed its reopening plans. She rejected the offer, worried she would have less oversight of her children’s safety if they return to school.

At the hub, she measured the space between desks to make sure her children can keep a distance of six feet from other students. She said she feels assured by the safety precautions the learning hub is taking, including requiring face masks and limiting the class size to about 20 students.

“I don’t want it to be a gamble with my children’s health,” said Atkins, who has had loved ones die after becoming sick with COVID-19. “I hope they keep their doors open because I’m not sending my children back to school.”

Before the hub, Miller’s grandmother would watch him and his siblings during the school day. The boy’s grandmother struggled to maneuver the internet, so Tyrone helped his three-year-old brother log on to virtual preschool, distracting Tyrone from his own work.

If he got stuck on a question or forgot a password to a learning platform, Tyrone would FaceTime his mother at her hospital job. “I go upstairs, I grab my phone, I call my mom and ask her to help me,” the fourth-grade student explained.

Internet access has been a top concern for teachers and education advocates in the city since the early days of the pandemic, when many schools were caught unprepared to provide virtual learning because large numbers of students struggled to get online.

That was the case for 11-year-old Jasmine Lewis, who said she spent several weeks at the start of the school year learning virtually from her dad’s three-bedroom house with five cousins, where the WiFi connection frequently dropped in the middle of class.

“Sometimes I just get irritated,” the fifth-grade student said. “If the WiFi disconnects, we just turn the WiFi box off and turn it back on. And then we miss at least five minutes of class.”

Lewis, who attends KIPP D.C.’s Douglass Campus, said she has not had any issues connecting to the internet from the learning hub, where students use hotspots. She also has more space to learn.

But there are struggles.

As noon approached on a recent weekday, a group of students were gathered in front of a video game. One boy kept banging on a table, ignoring a girl who told him to stop. Students struggled to follow along with teachers leading virtual classes.

Baxter moved to the middle of the room and intervened. The students quieted as he spoke.

“When a teacher tells you all to do something, you need to do it,” Baxter told the children. “If you have a problem, you come to an adult and share it in a constructive way.”

Baxter later said the children tend to lose focus around lunch. It’s hard for them to pay attention to a computer screen for several hours.

“I don’t want to sit for that long. But it’s what we have,” he said. “We try to fill it with different activities in-between but, either way, they’ve got to get back in front of the computer.”

Four teacher assistants at the learning hub help the children get back on track. They roam the classroom, which is decorated with palm trees and a red carpet, reminding students to log on and complete assignments.

If the students were home and doing distance learning on their own, Baxter said he worries students would shut off the computer and give up.

For Tiffany Warren, the learning hub has restored a sense of routine for her family. Before the hub, Warren said her son, Gregory, often stayed up late playing video games. It left the seventh-grader groggy and unfocused during the virtual school day.

“It was a setback for him,” said Warren, who wants her children to return to in-person school.

Sending two of her older children to the hub has also allowed Warren to spend more time helping her five-year-old son, who receives special education services and has physical and occupational therapy sessions throughout the week.

Warren said she encounters children in her neighborhood during the school day, not logged on to virtual class. She has started pointing them to the hub, sharing its location and hours.

“I see kids in the community lounging around,” she said. “I don’t know who their parents are but I always relay the message.”