Arkansas added a record 2,312 coronavirus cases to its tallies on Friday as the number of people hospitalized in the state rose to a new high.

The state death toll from the virus, as tracked by the Department of Health, rose by four, to 2,148.

Gov. Asa Hutchinson announced the record increase in cases as he named a 20-member “winter covid-19 task force,” comprised of hospital administrators, Health Department officials and others, to make recommendations on ways of slowing the virus’s spread and helping hospitals manage the growing number of patients.

Hutchinson also said he had authorized 30 members of the Arkansas National Guard to help the Health Department, as part of the contact-tracing process, contact and gather information from people who test positive.

“We are now overloaded again in terms of our contact tracing and case investigation,” Hutchinson said. “We need that help because the nurse investigators have a lot on their plate.”

Hutchinson said the task force, which will hold its first meeting on Monday, will examine how hospitals can better coordinate to manage patient loads, steps that could be taken to help hospitals maintain adequate staffing, ways of encouraging compliance with the state’s mask mandate and measures that could curb the spread of the virus.

He said he didn’t expect that to include a “shutdown” of the state economy.

“You can never predict exactly what the future is going to be like and you can’t rule out anything, but that’s not the direction we’re going,” Hutchinson said.

“We want to keep our economy open, and if people do what they need to do, you don’t need to shut it down.”

The number of people hospitalized in the state rose Friday by 21, to 826, breaking the previous record of 810 patients hospitalized as of Tuesday.

[Video not showing up above? Click here to watch » https://www.youtube.com/watch?v=mQJdYicsZXU]

The patients on Friday included 114 on ventilators, down from 116 on Thursday.

“Our hospitals are more full, but hospitals are trained, and they do this all the time so they’re able to move things around and do different staffing ratios and things like that to make sure that everybody that walks through the door get taken care of,” she said.

But, she added, “this is not a process that we want to sustain.”

Hutchinson noted that, earlier in the pandemic, the state used money from the federal Coronavirus Aid, Relief, and Economic Security Act to provide bonus payments to hospital workers, but those have since ended.

“We now have limited CARES Act resources, but we do have some, and so we don’t have the same level of funding for that,” Hutchinson said.

“We could look into state resources in addition if need be, but that’s just something that should always be on the table, if we can help to sustain our staff and make sure we have our patients covered with adequate staff.”

Out of the $1.25 billion the state was allocated under the CARES Act, $18.9 million remains unallocated, Scott Hardin, a spokesman for the state Department of Finance and Administration said Friday.

Hutchinson said he doesn’t have plans to shift public schools to virtual instruction because in-person instruction is important for some students.

He noted that schools can pivot to online instruction as needed in response to virus cases and staff shortages.

He said the high school football season had been successful, despite some games being canceled by virus cases, but acknowledged that Health Secretary Jose Romero is “a little bit more worried about basketball” since it’s played indoors, where the virus spreads more easily.

“So we’re going to have to watch that very carefully,” Hutchinson said.

Kimberly Mundell, a spokesman for the Department of Education’s Division of Elementary and Secondary Education, said public schools announced 46 shifts to virtual education this week in response to virus cases, up from 21 the previous week.

[Interactive Arkansas map not showing up above? Click here to see it: arkansasonline.com/arvirus]

State Surgeon General Greg Bledsoe, the vice chairman of the task force, said his own family’s experience with the virus illustrates it’s unpredictability as well as the strain it can place on hospitals.

Of the seven members of his family who were infected, “most of us had fairly mild symptoms,” he said.

But he said his 77-year-old father, James, the Health Department’s chief physician specialist, “ended up in hospital for 10 days receiving IV medicines and got very sick.”

“Thankfully, he’s been discharged, he’s doing much better and he’s at home and goes back to work next week, but if you have a 1-in-7 rate in families of people ending up in the hospital you can see where resources would be a problem,” Greg Bledsoe said.

Unity Health-White County Medical Center in Searcy had 24 covid-19 patients in its main hospital on Friday, the most there since the start of the pandemic, Roddy Lochala, the health system’s chief medical officer said.

A long-term, acute-care facility about 2 miles from the main campus had another eight to 10 patients from around the state, which has helped open up intensive-care beds at other hospitals, he said.


[Interactive tables not showing up above? Click here to see them: arkansasonline.com/schools]

He said the hospital, which had about 160 patients on Friday, has adequate bed space and supplies of medicine and protective gear.

But it has struggled to hire enough staff to keep up with the number of patients.

“We need more of everything right now,” he said. “I don’t know that there’s a position at our hospital that we aren’t needing more of when it comes to patient care.”

Working with covid-19 patients is especially labor-intensive, he said, because it requires putting on the protective gear, including an N95 mask, eye protection, gown and gloves every time a worker enters a patient’s room and then taking it off when the worker leaves.

“Over time it takes a toll mentally and physically as our hospital staff continue to work at maximum capacity for extended periods of time,” he said.

“I don’t think there’s anything the hospital isn’t looking at to get more staff,” Lochala added. “They’ve offered recruitment incentives. They’re trying every way that I could imagine to try to increase our staff.

“One problem is that all the hospitals are in the same boat. We all seem to be struggling with the same issue.”

The cases added to the state’s tallies on Friday included 1,559 that were confirmed through polymerase chain reaction, or PCR, tests.

The other 753 were “probable” cases, which include those identified through less-sensitive antigen tests.

At record levels since Nov. 5, the number of confirmed or probable cases that were active rose by 1,282, to 15,773, as 1,026 Arkansans were newly classified as having recovered.

The state death toll rose by four, to 1,968 among confirmed cases. The number of deaths among probable cases remained unchanged, at 180.

Among nursing-home residents, the state count of virus deaths rose by two, to 868.

The number of patients who have ever been hospitalized with the virus rose 102, to 7,817.

The number of covid-19 patients who have ever been on a ventilator rose by four, to 891.

Friday’s increase in cases was the first single-day jump that had topped 2,000 since the start of the pandemic. It occurred just two days after the previous record one-day increase of 1,962.

The average number of cases added to the state tallies each day over a rolling-seven day period set a new record, rising by 63, to 1,584. That was the ninth-straight day the rolling average set a record.

The state’s count of confirmed and probable cases rose by more than 100 in five counties on Friday.

The state tallies of cases rose by 97 in Sebastian County; 84 in Jackson County; 79 in Saline County; 78 in White County; and 73 in Pope County.

Among prison and jail inmates, the Health Department’s count of cases rose by 65.

Department of Corrections spokeswoman Cindy Murphy said the number of cases among inmates rose by 60, to 480 at the McPherson Unit near Newport; by seven, to 76, at the nearby Grimes Unit, and by two, to 746 at the Varner Unit in Lincoln County.

Among those prisons, the McPherson Unit had the largest number of cases that were active, 170, followed by the Varner Unit, which had 14 and the Grimes Unit, which had seven. 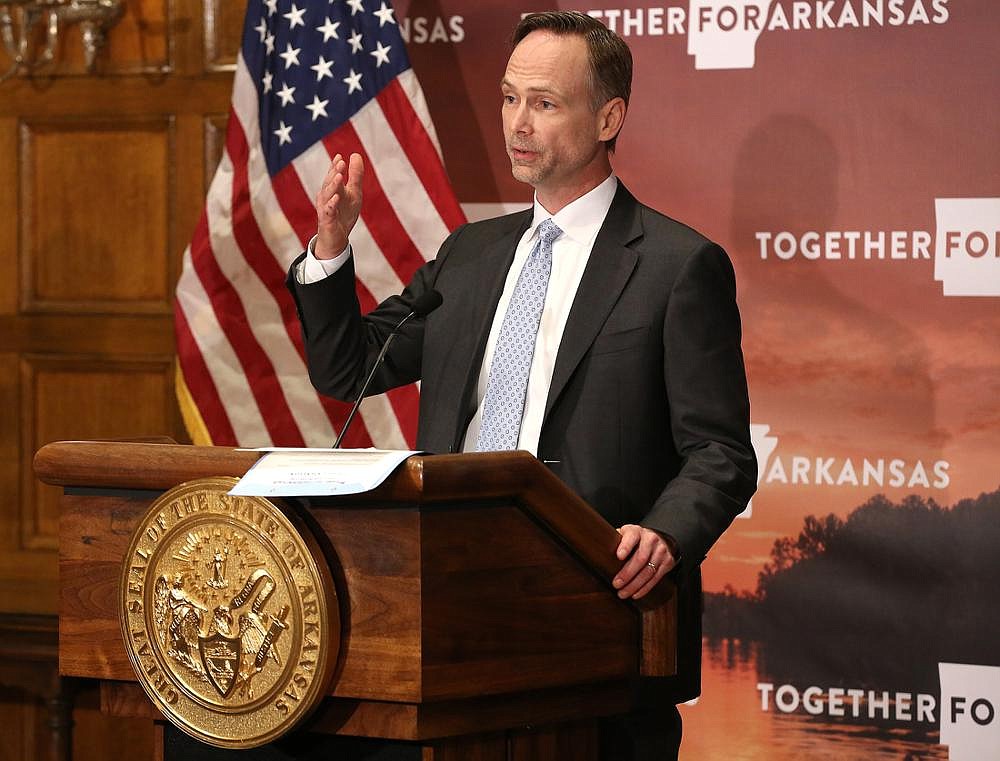 State Surgeon General Dr. Greg Bledsoe on Friday discussed his family’s experience with the coronavirus, saying of the seven family members who were infected, most had fairly mild symptoms. But his 77-year-old father, who is the state Health Department’s chief physician specialist, was in the hospital for 10 days before recovering. Bledsoe noted that “if you have a 1-in-7 rate in families of people ending up in the hospital, you can see where resources would be a problem.”
(Arkansas Democrat-Gazette/Thomas Metthe) 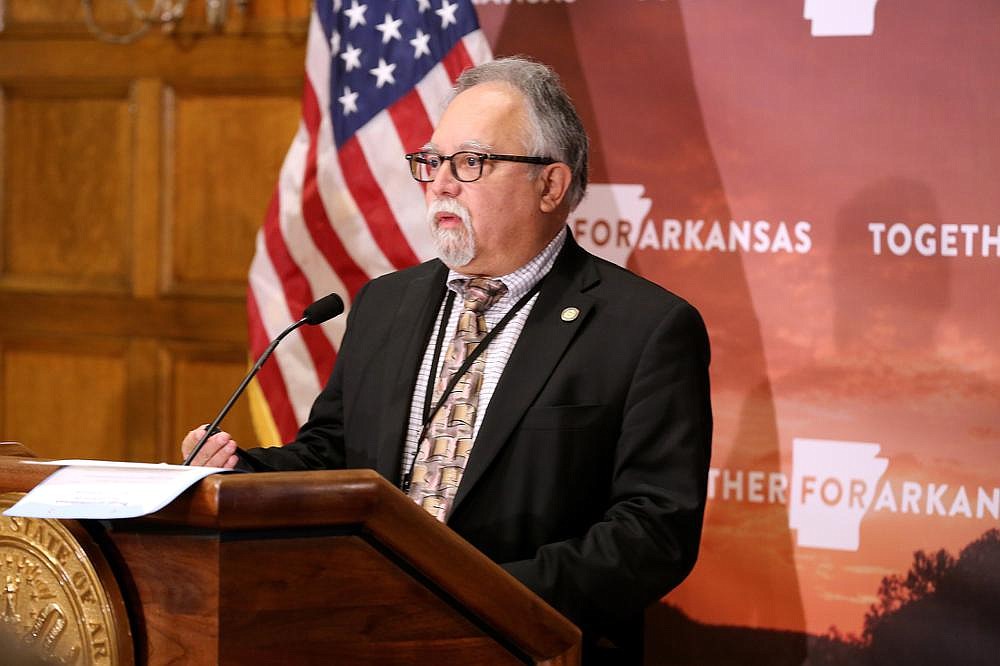