It is a new kind of fall TV season, amid a year in which the usual life cycle of a new television show – sewn in spring, developed in summer, harvested in autumn, often mulched come winter – has been disturbed.

“B Positive,” the only new CBS comedy this fall, stars Thomas Middleditch (“Silicon Valley”) as Drew, who has just discovered he needs a kidney, and Tony winner Annaleigh Ashford as Gina, an old high school classmate who impetuously offers him one of hers. 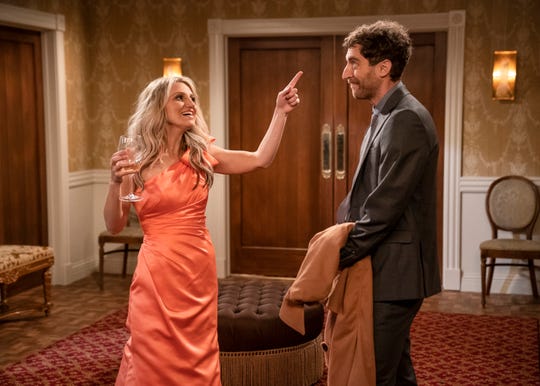 The catch – there has to be a catch or this all ends quickly – is that Gina drinks and takes drugs, and she needs to be sober for three months before qualifying as a donor. Drew is fretful by nature and will fret over this; Gina, who might be called a Manic Pixie Hot Mess, will give him reason to. It is the case that people donate kidneys, even to absolute strangers – there’s a term for it, “non-directed altruistic kidney donor” – though as seen here it feels less of a promise than a premise, a situation to build a comedy on. “I gave you my word, and where I come from that’s the only thing a person has to give. Except for, you know, money or sex,” Gina says when Drew suggests it may have been rash to make the offer.

It is a show produced under COVID-19 – so it can be done – set in a world in which COVID-19 does not exist. (It would only get in the way of the kidney plotline.)

Will Drew die before he has ever really lived? Well, he won’t die – it is not that kind of show. Television series have featured dying main characters before and, barring “the Big C” – cancellation – there are always ways to keep them alive: a misdiagnosis, a miracle cure, a multiverse. Things will go off and on the rails on the way there, naturally; the leads will align and misalign. But if CBS gives them the chance – and it is a network that is slow to cancel, even under normal circumstances – they will teach each other something about life, and living it better, because that is how that comedy machine works. But it would take some heavy lifting in the writers room to work them around anything more than a platonic relationship, so ill are they suited to it. (Drew is “the one guy I didn’t hook up with in high school,” as Gina says, and it should stay that way.)

Behind the camera, “B Positive” is the work of veterans: producer Chuck Lorre (“Two and a Half Men,” “Mike & Molly,” “The Big Bang Theory,” you know them), director James Burrows (co-created “Cheers,” directed every episode of “Will & Grace” in its original run) and creator Marco Pennette (“Caroline in the City”), who have been alive for 201 years among them.

This is to say a certain professionalism reigns, which some will see as tired and others as comforting; but the jokes are delivered efficiently and on time. There are death jokes, and pee jokes, and a couple of sex jokes that really seem inappropriate for the show’s 8:30 time slot, as coded as they may be. Themes from other Lorre sitcoms recur here – a medical element, as in “Bob Hearts Abishola” and “The Kominsky Method,” substance abuse as in “Mom.” The “odd couple” pairing is of course the meat and potatoes of the sitcom genre.

When Drew says – it having been suggested that he ask a friend to be a donor – “I don’t really have kidney friends. I mean, I have friends, don’t get me wrong, just not the kind that, you know, care about me,” you do believe him, the little rain cloud. That his wife (Sara Rue) has left him and that his teenage daughter (Izzy G) hates him, if only in that can’t-be-bothered teenage daughter way (“Love you.” “Yeah, great.”) seems reasonable; he’s a self-involved, sad-sack fussbudget. Apart from Gina, he doesn’t tell anyone he’s sick, but the way he refrains from telling them just makes him seem weirder: “You seem bleaker than usual,” says his ex-wife. As to Gina, in the two episodes available for review, he hasn’t really regarded her as much more than a walking kidney, as when a hungry cartoon character stranded on a desert isle looks at another character and sees a hamburger.

Oddly, Drew is told more than once, and we are seemingly meant to accept as fact, that the wait for an organ is 10 years, which isn’t true – the median time is half that, according to the American Kidney Fund. It does sound more dramatic, I suppose. He is also “TV ill,” which is to say, not incapacitated or even discomfited; his illness is, practically speaking, an idea, a motivation. (Similarly, although he is “a therapist” – “internet degree, but still very real” – it’s not a job we see him do, or even discuss, because his real job is being a character in this sitcom.) And as Hot Messes go, Gina is mostly chirpy and sweet, a people person and only part-time trouble – a responsible ray of sunshine by day, driving senior citizens to doctor’s appointments, leading them in rap-a-longs, and a blackout drunk (named Becca) by night. (Unlike in “Mom,” which could get serious about addiction, inebriation is played strictly for laughs.)

Things do improve with the second episode, which brings in a host of additional characters, including Linda Lavin (who starred in Pennette’s “Conrad Bloom”) and “Love Boat” doctor and KAOS chief Bernie Koppell, as residents of the assisted living facility whose residents Gina drives around. The dialysis center established in the second episode is essentially the workplace in the comedy, where Drew spends time with colorful weirdos to whom he is otherwise unconnected – Terrence Terrell as a former pro football player, David Anthony Higgins as a dentist slow on the uptake and Briga Heelan as a Type A business sort who “can’t let work know I’m sick – that’ll get you fired faster than being pregnant.” Darryl Stephens plays the drily acid nurse who plugs them in and checks them out, and though nearly every line he gets has a laugh attached, he is in many ways the most convincing character here. You have met this person in real life.

That is not to knock the rest of the cast, notably including Kether Donahue as Gina’s partner in crime; they’re just getting their feet wet. Middleditch has an uphill battle to make his character more sympathetic than annoying; Ashford needs the material to integrate the angel and the devil she’s being asked to play alternately into a single entity. But shows like this tend to ripen with time, so that, even if the writing never substantially matures, the characters do; they get real, like Pinocchio. Whether it has time, only time will tell.

Rating: TV-14-L (may be unsuitable for children under the age of 14 with an advisory for coarse language)