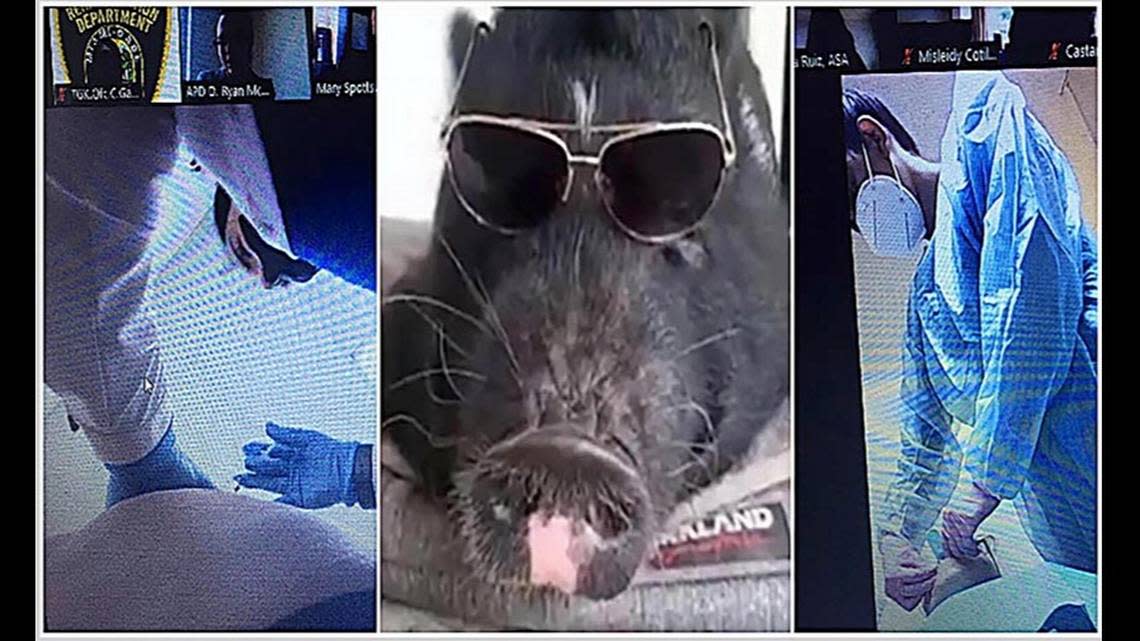 Miami Herald reporter David Ovalle has been using his Twitter to keep track of the unusual sights in Miami’s virtual courtrooms. Now that Miami-Dade courthouses are set to reopen on June 28, Zoom court hearings will become less frequent.

Let’s look back at some of the wackiest “Oh, Florida” and “Oh, Miami” Zoom court moments that happened during the COVID-19 pandemic.

A nurse that was waiting for her case to be brought before the judge had her camera on, and yes, everyone saw her injecting a needle into someone’s butt.

This peak 305 moment garnered national attention and will likely never be beat.

We’re not sure what it is about virtual hearings that makes people want to turn their cameras on during a medical procedure but this person gave everyone a front row seat to their teeth cleaning.

“Do you swear to tell the tooth, the whole tooth, and nothing but the tooth?”

“You can’t handle the tooth!!”

“Apparently this person “knows the drill”!”

Zoom bombers are everywhere. They’ve interrupted online classes and yes, even the courtrooms in Florida.

A virtual court hearing in Tampa last year was frequently interrupted with rap music, movie dialogue and shouting. The judge had to temporarily shut down the hearing when all of the participants’ screens were taken over by pornography. The hearing was for a 17-year-old teen who hacked into Twitter to impersonate prominent accounts, including Bill Gates, Kim Kardashian and former President Barack Obama, as part of a cryptocurrency scam.

A similar incident involving pornography also occurred last year in Leon County during a hearing regarding mask usage. And in Tallahassee, someone Zoom-bombed a hearing with a striptease.

“Music starts playing out of the box with my name, and some male figure starts doing a striptease and taking off his clothes. I’m going frantic. It was my first Zoom bomb, and it was with my name on the screen,” Miami-based election lawyer Benedict Kuehne told Miami New Times. “I had to apologize to the judge and say, ‘Your Honor, that wasn’t me.’”

Some of the sights: Barking dogs, a shirtless man appearing in a mirror behind a witness, a woman applying her eyelashes in a bathroom, and a Miami man with the screen name “Big Meat Daddy” holding up a sign with a phone number and obscene phrases.

A twerking big butt also reportedly Zoom bombed a court hearing battle against the City of Coral Gables regarding the construction of a Wawa gas station. Who knows, maybe the Zoom bomber was inspired by the North Miami man who in 2016 spontaneously began twerking in the middle of bond court?

Are you sure we’re not living in “The Truman Show”? Some things are best left for the privacy of your home. This sight is one of them.

Miami loves its animals. We got peacocks, iguanas and gators. We also have chickens and roosters. And sometimes we spot camels at the beach, a runaway ostrich in Homestead and kangaroos in the Redlands too.

So, we weren’t surprised to find pets making surprise appearances in court. We just didn’t count on it being goats and pigs.

One of our favorite moments? Seeing Penny the Pig, a rescue owned by lawyer Dan Lurvey.

“I was fearful the judge heard her snorting so I had to introduce her,” Lurvey said at the time. “The case was dismissed so I am giving her an associates position.”

What about dogs and cats?

There was that time a Miami-Dade inmate who was accidentally released because of a paperwork error showed up to his virtual January hearing with a sleeping Chihuahua on his lap.

Wardrobe malfunctions are tame compared to everything else on this list. And one Broward judge wasn’t pleased with what he was seeing early on in the pandemic.

A shirtless male lawyer. A female attorney still in bed under the covers. Someone wearing a “beach cover up” to try and disguise the fact they were at the pool and in a bathing suit. The judge posted a warning letter to the Weston Bar Association last year, reminding attorneys that they needed to be professional, even if the trials were virtual.

One of the most embarrassing wardrobe Zoom faux pas to happen in South Florida courtrooms, however, was in November 2020 in Miami:

A woman didn’t realize her camera was on and got nude. When a prosecutor said something, she freaked out, and ran off.

Lesson of the day: Never undress in front of a camera during court. No one wants to see you in your birthday suit.

Cursing and pickup lines are the least craziest thing you’ll see in the courts, which is why this is last on the list.

The curses have ranged from a guy trying to figure out how Zoom court works (“IS ANYBODY ON THIS S—?!?”) to a Broward assistant public defender yelling “F— you” to a prosecutor during a recorded Zoom court hearing when he thought the microphone was off.

People also seem to think the courtroom is the perfect place to flirt. In February, a man told a Broward judge he found her gorgeous and was told “flattery will get you everywhere, but maybe not here.”

Another man tried his luck with a Miami judge this month, but his pickup line failed too:

“Damn my judge is f—ing sexy.”

“You need to mute … Thank you for that.”