Ever wondered how or why someone is considered obese?

About one in seven children have met the criteria for childhood obesity since 2016, when the federal National Survey of Children’s Health changed its methodology, a report out Wednesday by the Robert Wood Johnson Foundation found.

While the percentage of children considered obese declined slightly in the last 10 years, it is expected to jump in 2020.

“We were making slow and steady progress until this,” said Diane Whitmore Schanzenbach, a Northwestern University economist and professor. “It’s likely we will have wiped out a lot of the progress that we’ve made over the last decade in childhood obesity.”

The trend, already seen in pediatric offices, is especially concerning as the Centers for Disease Control and Prevention this week expanded its definition of those at elevated risk of severe COVID-19 disease and death to include people with a body mass index of between 25 and 30. Previously, only those with a BMI 30 and higher were included. That could mean 72% of all Americans are at higher risk of severe disease based only on their weight.

Obesity is a top risk factor for nearly all of the chronic health conditions that make COVID-19 more dangerous, including diabetes, hypertension. heart disease and cancer. And childhood obesity is a leading predictor of obesity later in life.

BMI factors in weight and height to measure body fat. It can, however, overestimate body fat in people with muscular builds and underestimate it in those who have lost muscle, according to the National Institutes of Health.

Children are “gaining not insignificant amounts of weight,” said Dr. Lisa Denike, who chairs pediatrics for Northwest Permanente in Portland, Oregon. “We’ve seen kids gain 10 to 20 pounds in a year, who may have had a BMI as a preteen in the 50 or 75th percentile and are now in the 95th percentile. That’s a significant crossing of percentiles into obesity.”

Denike said one 11-year-old patient at his recent physical was found to have gained 40 pounds. Type 2 diabetes rates in children are rising, and even though the boy doesn’t have it now, Denike said, “I suspect he will in the coming years as his parents already have it.”

“He’s home in an environment struggling with parents with same issues rather than learning in health class and having activity outside,” she said. “Kids are reflections of what their parents do.”

Disparities in childhood obesity rates have existed for decades and now mirror the disproportionate way COVID-19 is affecting people of color and those with low incomes, said Jamie Bussel, a senior program officer at the Robert Wood Johnson Foundation.

“In both cases, these outcomes reflect decades of disinvestment in specific communities and specific groups of people, often driven by the systemic racism and discrimination that are still so prevalent in our society,” he said.

Young people in households making less than the federal poverty level are more than twice as likely to be obese as those at the highest income levels, the RWJF report said. The pandemic and ongoing economic recession made many of the factors leading to obesity worse, including poverty and health disparities, said Bussel.

“We know that families switch to lower quality food when they face food insecurity – that is, more calorie-dense foods and less variety,” said Schanzenbach.

Childhood obesity ranges from 11% in the highest income families to about 20% in low to middle-income ones, said Dacones. That contributes to higher obesity rates in Black and Hispanic populations, which include more people at lower income levels. In California, for example, she noted the number of people classified as food insecure increased from one in nine to one in six.

A July report by Northwestern University researchers found more than 41% of Black households with children experienced food insecurity between April 23 and June 23 , compared to just under 40% of Hispanic households and just over 23% of white ones. The rates have declined for Blacks and Hispanic families since then but remained unchanged for white families.

“Even though it’s not as bad as it was during the peak of the pandemic, food insecurity rates are still awful,” said Schanzenbach.

Jim Baugh is founder and president of PHIT America, which circulated a petition starting in August to require 30 minutes of recess at least three times a week for all students.  He notes nearly half of grade schools have no physical education and “kids are more sedentary than they’ve ever been.” The U.S. ranks 47th out of 50 countries in the world in children’s fitness.

University of Virginia School of Medicine researcher Dr. Zhen Yan has studied exercise’s role in curbing the effects of COVID-19 and agrees more effort needs to be made to increase activity during childhood.

“If we want to protect our kids from deadly COVID-19, we must increase their physical activity and get them healthier,” said Yan. “Too many kids already have pre-existing conditions such as obesity.”

Young adults who have experienced weight stigma and mistreatment are more prone to “increased vulnerability to distress” and bad eating habits during the pandemic, University of Connecticut researchers concluded in a study in the Annals of Behavioral Medicine. The likelihood of binge eating during the pandemic was almost three times higher for people who had experienced weight stigma before the pandemic than those who hadn’t. The findings were true for men and women.

Denike said the “mental health crisis” that existed before the pandemic has heightened and contributed to an increased number of eating disorder patients.

Is it the flu or COVID-19? How to tell the difference

Young people at risk of eating disorders “seek areas to control during stressful times,” said Denike. They have a “limited menu of options” as children, she said, so restricting or overindulging in food is convenient.

With far more people feeling distress during social isolation, there’s more risk for people who “had some tendency to use food for not so good things,” said Dr. Imelda Dacones, Northwest Permanente’s CEO. “It’s driving kids as well as adults to do more unhealthy things.”

Social isolation hasn’t changed much for Tierney Sadler, a work-at-home marketing writer in Alexandria, Virginia, who said she is “morbidly obese” and about 100 pounds over the weight she should be. But she can easily identify with kids struggling today as her childhood weight problems were a constant focus of her family and source of stress, which only made her eat more, she said. 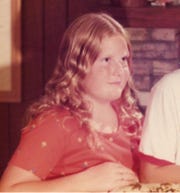 Tierney Sadler, now 57, is shown when she was 12 and what she now calls “chubby” but made her feel like “a monster” back then. (Photo: Family photo)

“It was never going to be good enough and I couldn’t shake that,” said Sadler, 57, who was on a diet in kindergarten. “Obese kids have a lot of company today, but back in the ’60s, if you were the one fat kid, it really kind of does a number on you.”

Parents can help, however, she said, by shielding children from household stress.

“Food is one of the ways we comfort ourselves,” said Sadler. “There are a lot of things children absorb from their parents, who may be unemployed and terrified of the whole COVID thing. Their pores are so wide, they can suck in all that negative energy.”