Eric Trump will host a “Make American Great Again!” event at Huron Valley Guns in New Hudson. Doors open at 11 a.m. and the rally will begin at noon. 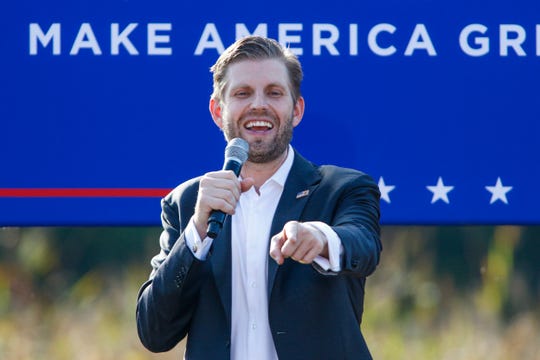 According to a press release from the campaign, he will “share President Donald J. Trump’s Make America Great Again agenda with the American people.”

After that, Eric Trump will hold another rally in Northfield, Minnesota at 5:30 p.m.

The president has had to rely on his surrogates to continue his campaign efforts while he recovers from COVID-19.

He and his team laid out an aggressive return to political activities, including a big White House event on Saturday and a rally in Florida on Monday, a week after his hospitalization for the virus that has killed more than 210,000 Americans.

As questions linger about his health — and Democratic opponent Joe Biden steps up his own campaigning — Trump planned to leave the Washington area for the first time since he was hospitalized. He is also increasing his radio and TV appearances with conservative interviewers, hoping to make up for lost time with just over three weeks until Election Day and millions already voting.

The president has not been seen in public — other than in White House-produced videos — since his return days ago from the military hospital where he received experimental treatments for the coronavirus.

WSOP Main Event champion to be crowned, asterisk or not

3 steps to make a promising career in the furniture industry

Olympic sailing champ says she was assaulted by official

DoorDash Has All The Makings Of The “Next Amazon”

How should I plan a home gym?