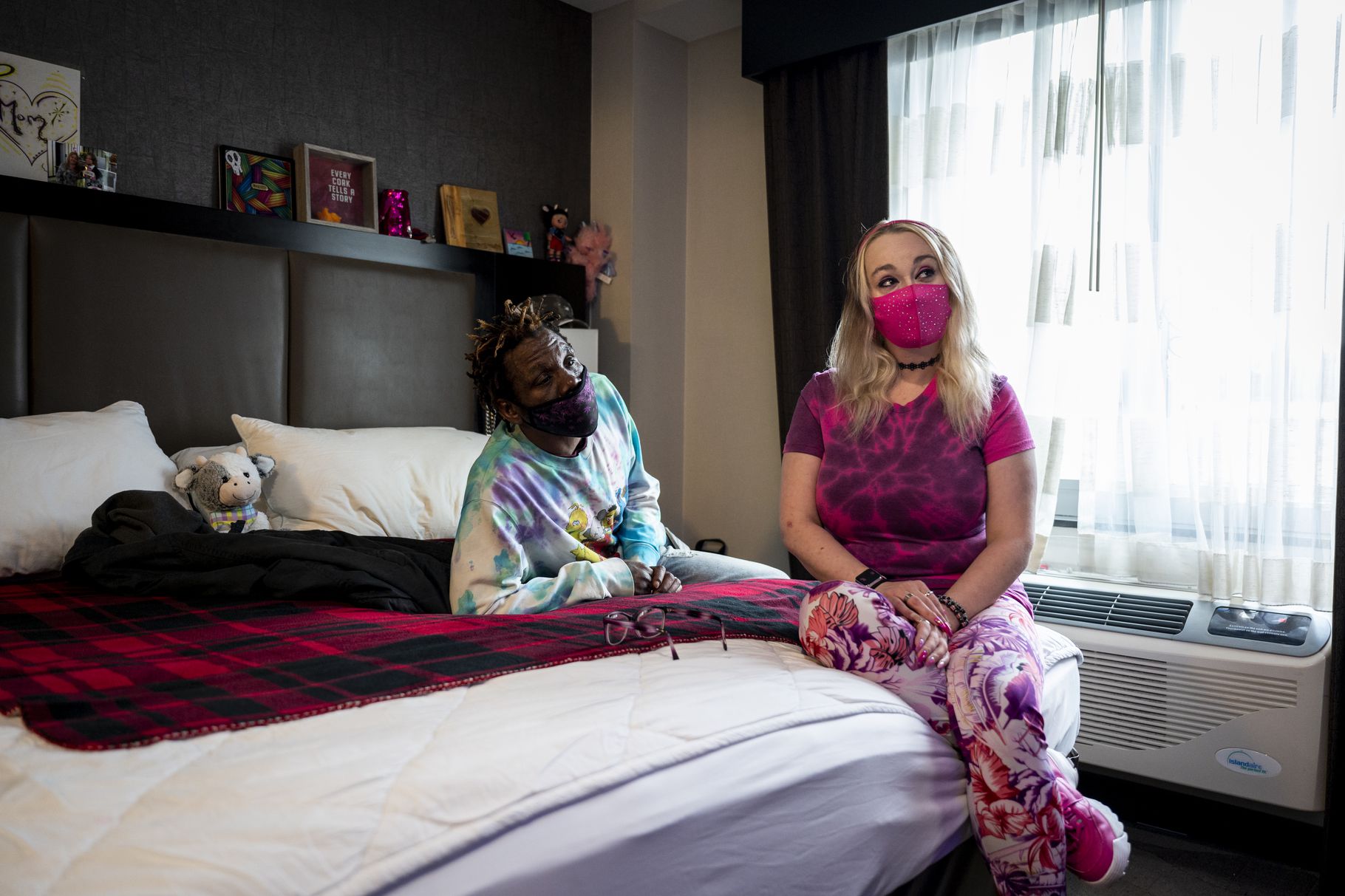 Yves here. These examples illustrate what a difference having a space, as opposed to living on the streets or in shelter, make to the homeless. With so much underutilized hotel and residential space, it’s a shame programs like this are being terminated because Covid is supposedly in retreat. The fact that American cities don’t even have public restrooms (much the less keeping them minimally clean as quite a few world cities seem able to do) is another manifestation of our hostility to the poor and outsiders.

By contrast, this story describes what a powerful impact having one’s own bed, shower and toilet had made for these recently homeless New Yorkers. Having that small measure of control over their lives has enabled them to move forward on other fronts when before, merely surviving was a full time project. It also counters the old view of the early 2000s, as cited by Malcolm Gladwell, that the chronically and episodically homeless consisted of at least occasional substance abusers. Now, unaffordable housing is a significant contributor. From the National Low Income Housing Coalition:

• Nationally, there is a shortage of more than 7 million affordable homes for our nation’s 11 million plus extremely low-income families. View The Gap
• There is no state or county where a renter working full-time at minimum wage can afford a two-bedroom apartment. View the Out of Reach Map
• Seventy-five percent of all extremely low-income families are severely cost-burdened, paying more than half their income on rent.

By Claudia Irizarry Aponte. Originally published at THE CITY on May 10, 2021

Nunu Jefferson and Ashley Belcher in their hotel room on the Lower East Side, Apr. 29, 2021. Hiram Alejandro Durán/THE CITY

Since last April, thousands of homeless New Yorkers in the city’s shelter system have been staying in formerly private hotels — a need brought on by the pandemic.

Mayor Bill de Blasio has set July 1 as the day the city is expected to fully reopen amid rising vaccination rates and decreasing infections. That’s also the day the city has suggested it will complete its transition of people from hotels back to the homeless shelter system, where people were 61% more likely to die of COVIDthan anywhere else at the height of the pandemic last spring.

Advocates for the homeless have criticized the planned return, noting that on Jan. 21, President Joe Biden extended an executive order mandating that FEMA reimburse all costs relating to emergency management of “non-congregate shelters” until September.

As the city moved people from shelters to city-contracted hotels last year, advocates with the #HomelessCantStayHome campaign raised funds to place up to 30 people into private hotels. As THE CITY reported, those once homeless New Yorkers had a very different experience than the more than 12,000 placed in hotels set up by City Hall.

THE CITY recently caught up with some of those staying in rooms funded by the campaign and asked them to reflect on the impact of residing in a private space after life on the streets or in shelters.

The simple dignity of having a clean bed and a shower of their own meant they could spend the past year working, going to school and getting their health in order. Otherwise, their days would have been filled with worries about where to eat, sleep or relieve themselves next amid the pandemic.

Now they’re scrambling to find housing with vouchers from the city, hoping to avoid a return to the streets or shelters.

Here are some of their stories.

Responses have been lightly edited for length and clarity.

Before the coronavirus ravaged New York last spring, Wolford, 35, worked as an upholsterer by day and slept in the city’s subways, by night. He moved into a hotel on the Lower East Side provided by the Homeless Can’t Stay Home campaign in April 2020.

“Before the pandemic, I made money, but not enough to afford a place to live in New York City. And it’s hard to focus on work and on finding gigs when you’re sleeping on the street. I was in the Fedcap program and they were helping me find jobs and apply to school, and that helped a lot. But being here is what made the difference.

“I got a computer and started taking some free Microsoft cybersecurity courses. Now I’m just three credits away from the final exam. I didn’t even know what a ‘command prompt’ was a year ago! 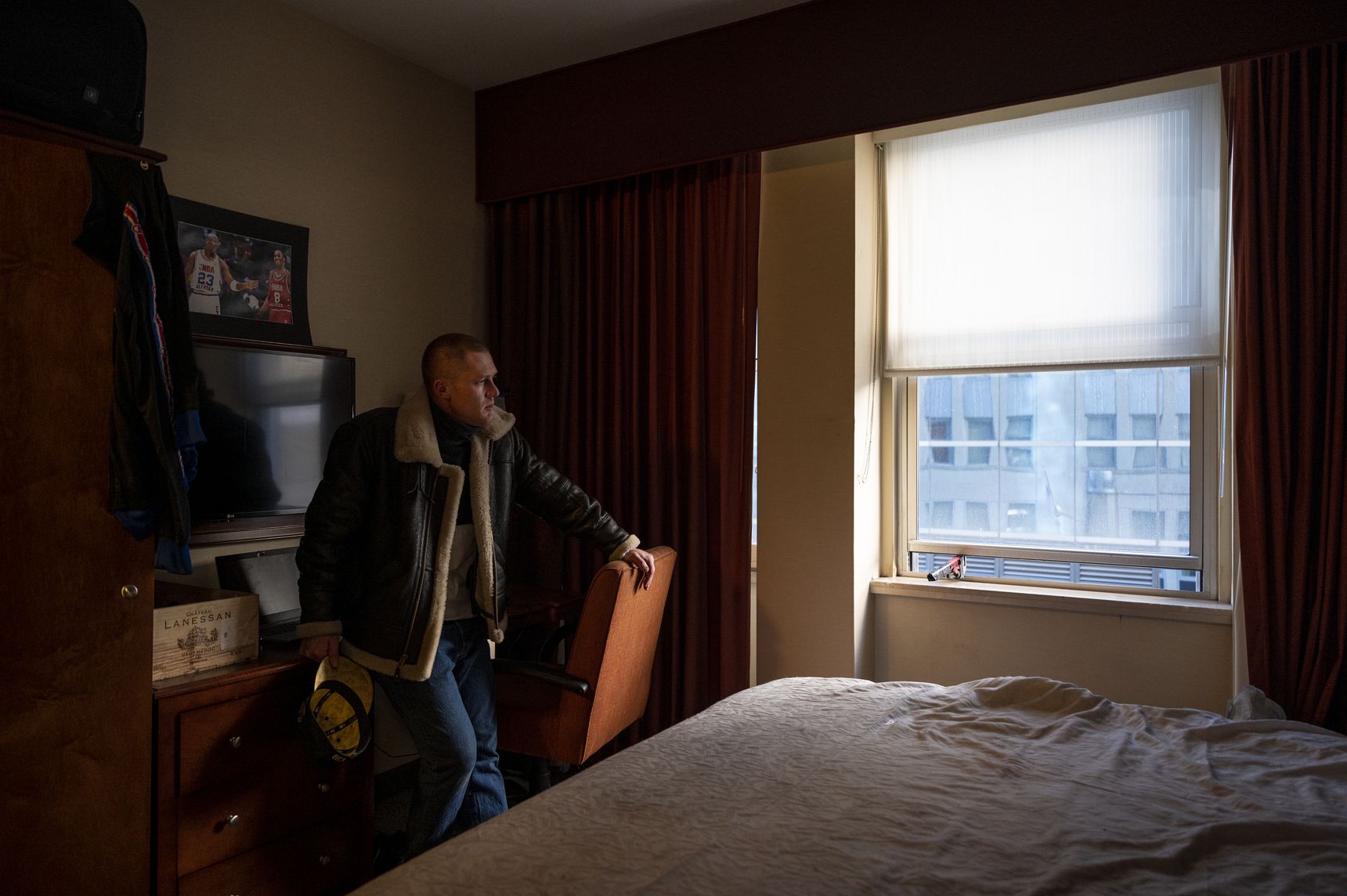 “But the main thing now is finding an actual apartment, because this hotel thing won’t last forever. I have a voucher, I got it last year, but it’s hard to find an apartment in New York with what I have now. The city gives up to $1,200 a month, and you can’t sublet — it has to be your own apartment. You try finding an apartment, or even a studio, for that kind of money these days. It’s just really hard.

“Living in the hotel has been a real confidence boost. It’s been the first and only bit of stability since I became homeless. I can finally be a regular person again.”

Ashley Belcher, 28, and Wiaheed “Nunu” Jefferson, 36, have been living in a Lower East Side hotel room since April 2020. Belcher is originally from Carbondale, Penn., and has drifted in and out of homelessness for most of her life. Jefferson is a native New Yorker.

“I’m doing good now. Once we settled into the hotel I started taking care of myself. I can go to the doctor now, which means I can get my prescriptions for my irritable bowel syndrome and ulcerative colitis. I also went to the dentist, which I hadn’t been to in so many years. I could never go to the doctor when we lived outside. I can do these things because I don’t have to worry about where I’m going to be or where I’m going to sleep every day

We buy shirts at the Salvation Army and we dyed them with the kit, and we sell them on Second Avenue and Delancey. So we have our little side hustle there…

“Our biggest challenge now is finding an apartment. The hotel is nice but we need our own space. We have a bed and we have a private bathroom, for example, but we don’t have a kitchen. So we still have to buy most of our meals.

“We both got housing vouchers last year, but we can’t find anything we can afford. We go on StreetEasy every day and can’t find something that costs $1,250 — what our voucher is worth. And when we do find an apartment in our budget, we’ll call the number on the listing or the landlord and they’ll tell us that they don’t take the voucher, which we think is illegal.

“This hotel is the biggest thing that has ever happened to us. It’s also gotten me thinking that I want to go to college. I saw an ad on Facebook the other day for online school — I think I could do that. I wrote to them and told them our situation and [the admissions representative] encouraged me to apply, even though I need a laptop.

“I want to become an addiction counselor. My mom passed away in March after a long battle with addiction. I want to be able to help other people.”

“Landing this hotel was a big change for me right there, this has been the biggest thing so far for me in my life. It’s opened my eyes to all the different possibilities in life.

“I went to work. I’m still doing my gigs in construction and like handymen work, and we’re selling tie-dye shirts on Second Avenue.

“But I also help out in the hotel — I sweep up the halls, I take out the trash. In the past year, I’ve shoveled snow, I’ve cleaned out graffiti.

“I do all that because I want to show management and all the people who are here that I’m clean, that I’m stable, that I take care of myself. That I can keep myself clean, I can keep my building clean. I try to show them that I’m fit to live here.”

Marcus Moore, 49, lived in an abandoned Far Rockaway house for three years before the police cleared him out of the space weeks before the city shut down in March 2020. He moved into a Lower East Side hotel room a month later and currently lives in a hotel room near the Port Authority Bus Terminal. He has been a board member at Picture The Homeless, a homeless-led advocacy group, since 2016.

“I’ll be honest with you, a year after being in this hotel — I’m scared. I’m concerned… that we could be thrown back into the streets and the congregate shelters.

“The transition should be: shelter to hotel to permanent housing, or just simply from shelter to housing. But now we’re contemplating going back to these spaces where we’re not safe. And it’s not right.

“But I’m also proud of what we’ve accomplished, and what our movement has accomplished. In spite of it all, we’re all in good spirits. This all started because there were 30 of us who got hotel rooms through crowdfunding with the Homeless Can’t Stay Home campaign, and we pushed the city to provide hotel rooms for everybody. And we won. And when we wanted more time social distancing in the hotels, we protested in front of [DHS Commissioner] Steve Banks’ house — and that got a lot of attention, too.

“I got the hotel through my organization, Picture The Homeless. I’d just gotten kicked out of this abandoned house that I occupied in Far Rockaway for like three years. I was living in the subways, making 40 deliveries for DoorDash a night on my bike, worried about the virus and wondering if my body would break.

“So it’s weird — this pandemic has taken so many people’s lives. It’s been horrible. It’s been deadly. But in a crazy way, it saved some lives, too. It saved my life: I’m living in a clean hotel room, I have my health in order, I can shower, I’m clean. Through this campaign, through this activism, I got a housing voucher for the first time in my life, and cash assistance too — that’s crazy for Marcus Moore!”

This story was originally published by THE CITY, an independent, nonprofit news organization dedicated to hard-hitting reporting that serves the people of New York.