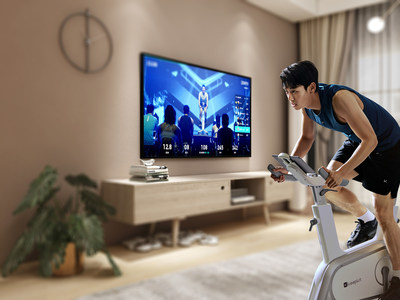 After its trial period, Keep has also tried other live-stream classes, like yoga, Zumba, calisthenics, and ballet fit.

For example, the live-streamed cycling classes, as the upgraded cycling course content, provides users with multiple options for live-stream classes several times a day, so that members can still benefit from their memberships. In addition, live-streaming will also make users feel a sense of authenticity while taking the classes by creating an immersive experience.

Keep has also made some innovations for livestreaming, like establishing a scoring system that shows real-time rankings, incorporating natural competitive elements in cycling. They have also set different music for different sessions, so that users can cycle to the beat. Many of these ideas and designs are supposed to reduce psychological resistance in users and get them to progress even further.

The interactive model of live-stream cycling is a continuation of Keep’s exploration into the mode of “Product + Content + Trainer”. The trainer’s presence while live-streaming adds enthusiasm to the stream, while also improving users’ “sense of joy”, which helps them overcome resistance in exercise and increases user stickiness with Keep live-stream classes. Plus, live classes can bring a real sense of sustenance for offline fitness when compared to recorded classes, incorporating a critical sense and atmosphere of group.

The data speaks for it itself to a certain extent — according to data from Keep, users were active 3.6 times a week during the month they offered live-streamed classes, which is high for an online mode that is inherently robotic.

Keep insiders revealed that it is currently optimizing its trainer team and has provided a series of attractive and favorable conditions to recruit live-stream trainers, such as training, and multi-channel traffic. It also launched a management contract with trainers and aims to develop them into social media influencers.

The live-stream trainer team is becoming the new competitive advantage at Keep.

In terms of quantity, more and more trainers have joined Keep since they issued their plan to recruit trainers. These trainers include a number of network veterans with a wealth of experience in live broadcasting and what they call “veteran newcomers” who have been trainers for a long time and are live-streaming for the first time. Keep has also customized training programs to suit different trainers.

In addition to providing training to develop trainers that goes over costumes, performance, and operations, Keep is also focusing on the trainers’ influence on social media platforms. Keep provides more online traffic to trainers to help them get more followers and improve their relationship, and to produce the so-called “fan economy”.

In addition to helping bolster trainers’ overall appeal and influence, the trainers’ salaries have also become much more lucrative. In addition to class fees, trainers can earn income from cooperating with businesses and malls and reaching agreements for paid content. The term “fitness trainer” has been redefined in this new era due to live streaming. The trainers have also achieved a greater sense of belonging and accomplishment.

In the first half of this year, Keep closed an $80 million round of financing. Its valuation after this investment was not disclosed, but based on the industry, it has exceeded $1 billion, making it a unicorn in sports technology. Even in terms of users, Keep is leaps and bounds ahead in the fitness tech field, with more than 200 million users.

Now with the class system complete and the live-streaming upgraded, Keep is gradually integrating content, products and data into the cycling class. Users benefit from this by finishing a complete cycle of “want to, do it, get data-driven feedback, improve scheme, be motivated to continue on” on the bike. Moreover, it meets users’ social needs, and the “Product + Content + Trainer” model has been improved even more.

According to industry insiders, the launch of Keep’s cycling courses and live-streams for other projects are the results from its continual exploration of the “Product + Content + Trainer” model. Its staged success also bolsters confidence and successful experiences to further expand their reach online.

As for the future, home fitness is an inevitable trending of the fitness industry, and Keep’s online courses may have a more profound significance on the industry, even Keep itself.