Right around Christmas, you may have noticed Peloton Interactive (NASDAQ:PTON) began offering 60-day free trials of its app. That was twice as long as the standard free trial it typically provided customers.

It’s no coincidence this occurred immediately after the launch by Apple (NASDAQ:AAPL) of its Fitness+ app, which gives customers a three-month free trial. Apple also charges only $9.99 per month for a subscription, which immediately makes it a rival that Peloton and its investors must consider. And it raises the question of whether the connected-fitness leader will drop prices to remain competitive.

It’s done that once before, and a second cut could affect revenue, so let’s see if that’s something Peloton investors should worry about. 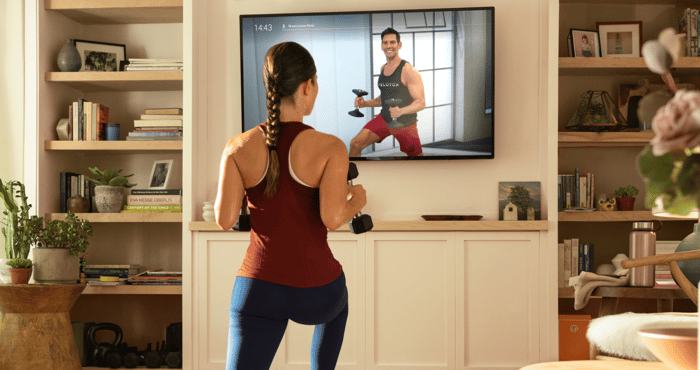 Peloton stock raced higher during 2020 with shares quintupling in value as the COVID-19 pandemic locked people in their houses, causing them to bring their workouts from the gym into their homes.

Consumers also have the option of signing up just for the fitness classes without purchasing any equipment, and that will cost you $12.99 per month. It had been around $20, but Peloton dropped it in late 2019 in a bid to boost subscriber rolls. It seems to have worked.

With Peloton expected to report earnings the first week of February, investors shouldn’t expect the online exercise guru to see any letup in its growth. Connected fitness subscriptions have almost doubled in the past year, and subscriber churn has dropped.

Yet it can’t be denied that the massive growth was fueled by the pandemic. The meteoric pace may falter if a sense of normalcy returns to our social interactions and people are able to resume previous out-of-home habits, including going to the gym.

There are also more competitors entering the market, not just in fitness classes, but equipment, too.

Nautilus (NYSE:NLS), for example, also saw its revenue surge over 150% in the same three-month period, and it reported net profits of $33.8 million, compared to an $8.8 million loss the year before. (Peloton swung from a $50 million loss to a $69 million profit.)

Consumers can buy cheaper equipment and use Peloton’s fitness classes, and now with Apple’s Fitness+ they can get a cheaper fitness class, too.

Cutting out half the market

While that’s true, I don’t think Peloton investors need to worry. Apple has designed a sleek, expansive, and very competitive app offering more fitness classes for more equipment than what Peloton sells, but Peloton still holds a substantial edge that could be difficult for Apple to surmount.

The main drawback is that Fitness+ requires you to also own an Apple Watch, and even though it’s considerably less expensive than even Peloton’s cheapest bike, it significantly raises the cost of a subscription for anyone who doesn’t already own one.

Also, Fitness+ is not available to Android users, and though access through the Apple Watch seamlessly integrates with Apple Music and Apple Health (a feature beneficial to those invested in the ecosystem Apple has created), it’s superfluous to others who are not.

There’s also currently no social connection in Fitness+ as there is in Peloton’s app. That feature isn’t important to every user, but for those not wanting to feel like they’re all alone and who appreciate the communal atmosphere, it could make Fitness+ seem lacking.

Fit for the future

Peloton has created a premium aspirational luxury brand that resonates with consumers, especially during the pandemic. And while the tech stock may lose customers who go back to the gym, it will find it has created many more loyal customers who will remain.

The fitness classes only account for 20% of total revenue, meaning that even if Peloton cuts the subscription price, it’s affecting a small portion of the total. So although Apple has created a great fitness option for the Apple ecosystem, Fitness+ is not the threat many perceive, and Peloton Interactive doesn’t even have to drop its subscription price to compete.