Ryan Butler was 19 and playing guitar in two touring bands on the heavier end of the musical spectrum — Wellington and Unruh — when he lost his mother to Wilson’s disease, a genetic disorder in which excess copper builds up in the body and eats through the liver.

He had just turned 43, the age at which his mother died, when a doctor confirmed what Butler had already long suspected.

He, too, had contracted a disease so rare a liver doctor told him he would more than likely be the only Wilson’s patient the doctor’s staff would ever see.

This was in August 2019, after six years of regular visits to a hematologist for what he says were “really low platelets,” a sign of a liver disorder.

As the guitarist recalls, “I told him over and over ‘My mom passed from Wilson’s and I know it can be passed down genetically, even though it’s rare. Please check me.’ ‘Oh, no, you don’t have Wilson’s.’ Over and over with this guy. And he could never figure out what was wrong with me.”

Then, the eye problems started.

“I got acute angle glaucoma, out of nowhere, and lost the vision in one eye,” Butler says. “I was getting all kinds of weird sicknesses and fevers. And the eye doctor was like ‘There’s something wrong with you. You need to figure out what’s going on.'”

That’s when a trip to the gastroenterologist confirmed his worst fears.

As Butler recalls, “That doctor was like, ‘You have Wilson’s disease. I’m gonna send you to a liver specialist right away.”

A liver transplant saved Butler’s life but was expensive 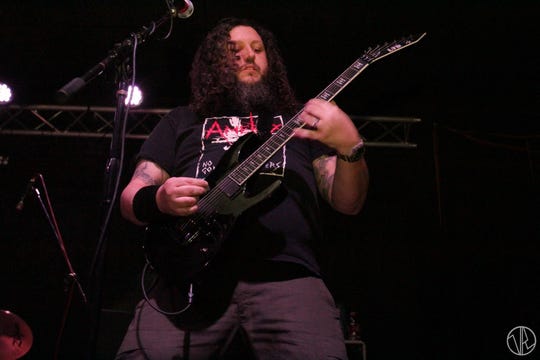 Ryan Butler on stage at Club Red for the Unruh reunion in 2015. (Photo: Valerie Littlejohn, No Ceiling Photography)

It’s been a month since Butler’s liver transplant.

“I feel pretty lucky to have gotten this far through it,” he says of life with Wilson’s.

“The month before I got the transplant, they stopped having me take medicine. None of it was working anymore because my liver couldn’t metabolize it. It was just so shot. So it’s pretty intense. You degrade slowly over time. And then it just hits you.”

“I’m pretty much couchbound,” he says. “In my head, I feel so much better but then I try to move around and it’s like, ‘Oh yeah, I’m not feeling good.'”

As he continues to recover, Butler will be facing major medical expenses.

“I haven’t worked in months because I’ve been so sick,” he says.

“I’ve given almost everything I’ve made these last two years to doctors and a dentist to get ready for the transplant. And my wife hasn’t worked in months because she’s been taking care of me. And the bills just keep coming when you go through something like this.”

He was told that the cost of the medication alone will be enough for him to meet his $7,000 deductible every January.

“I don’t exactly have that just sitting around for fun,” he says. “So I’m gonna have to figure that out every year from now on.”

The Phoenix rock community rallies around a friend and bandmate

In the meantime, his friends in the music community have come to Butler’s aid with a virtual benefit concert they’ve called Butler Fest at 3 p.m. Saturday, Nov. 21, to help him cover medical expenses.

Broloaf is the last band Butler did a show with, playing Cro Mags covers at the Yucca Tap Room as part of their Halloween weekend festivities in 2019.

“And I had had my biopsy on my liver a few days before that,” Butler recalls. “And I was puking in the trash can before our set. I was actually talking with one of the guitarists from Broloaf about starting a new band. And after that, I was like, yeah, I’m not gonna be playing for a while.”

Another former bandmate, Danny Marianino of North Side Kings, is contributing a set of standup comedy.

Ryan Butler and other members of Landmine Marathon. (Photo: Provided by the artist)

And it was yet another former bandmate, Matt Martinez of Landmine Marathon, who approached him about the idea of putting a benefit show together. He enlisted the aid and technical support of Michelle Donovan at the Nile Theatre in Mesa, where many of the sets are being filmed.

“Matt kind of just surprised me with the lineup,” Butler says. “He was like, I’m gonna do a benefit to stream online. And I was like, ‘OK.'”

Then he showed him the lineup.

“And I was like, ‘Are you kidding me?,’ Butler recalls with a laugh. “So it was a real shocker. And it really kind of reflects my musical tastes, honestly. It’s all over the map.”

It’s been an overwhelming experience for Butler to see these people come together in his hour of need.

“A guy like Jim Adkins or Papa M, it’s hard to believe they would take time out of their day to film a set for me,” he says.

“Exhumed is a big death metal band. They had to fly their drummer out to do it. It’s just pretty amazing that they’re coming together just to help me out. It really feels special. I’m just glad I’m well enough that I’ll be able to kind of enjoy it.”

Butler has been on the Phoenix music scene for decades

“Just through punk rock and playing in bands when we were in high school, crossing paths,” he says. “Our previous bands in the ’90s played together a lot. And even before he was in Landmine, he recorded Landmine in his studio.”

Getting a benefit together for his friend was pretty much a given for Martinez, who also started a GoFundMe for Butler in late August.

“I’ve experienced extreme life-changing medical events, and I know how our healthcare system works,” he says.

“I knew there was gonna be a huge financial burden associated with not only the procedure itself but the aftereffects, the healing process, not being able to go to work immediately. So I networked with Michelle and we brainstormed ways to make a virtual benefit happen.”

A lot of the filming was done at the Nile.

“Michelle has a crew that’s really adept and in tune with the technology side of it and making that happen,” Martinez says. “We’ve definitely faced a lot of challenges going through the process and adapted to them. So it’s been a fun learning experience”

Martinez was beyond impressed by the willingness of the artists he approached about sharing their talent and time to help his friend.

“Especially with the national artists, you ask with the idea that they’ll probably say no,” he says.

“They’re either not gonna be available or it’s just not gonna be their thing. But 95% of this lineup we envisioned said yes immediately without question. It was  pretty humbling and kind of a testament to Ryan’s friendships that he forms.”

These are friendships Butler started forming while still in his formative years at Arcadia High School, having hit the road his junior year with Lyburnum, a screamo band.

From there, he started Wellington, a doom-metal trio that released one album and a handful of EPs.

His next group, Unruh, toured the hardcore circuit in the States and Europe and released two albums and some EPs before breaking up.

After a brief stint in Structure of Lies, he was invited to join North Side Kings as they were gearing up to tour with H2O and Madball, joining Landmine Marathon, whose debut album he’d recorded in his studio, Arcane Digital Recording, in 2006.

He spent the next 10 years in Landmine Marathon, which did more touring and recording than those other groups, while still playing in North Side Kings.

Butler hasn’t done much playing since Landmine ended in late 2015. There’s been a North Side Kings reunion show and that ill-fated Broloaf show with the trash can.

The illness took him off of the stage

This past spring, he says, “Mobility was becoming an issue. By summer I was completely on a cane and not really getting around much at all. Plus the coronavirus. I couldn’t be around that at all with my immunocompromised condition.” 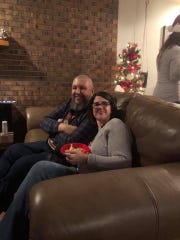 Ryan Butler with his wife, Amy. (Photo: Provided by the artist)

Playing in bands is a side of his life he’s missed these past few years.

“When Landmine stopped, I had been touring and playing in multiple bands for so long, I was like, ‘I need a break,'” he recalls.

“So I didn’t pick up anything. And North Side Kings talked about playing more after that reunion. But my dad passed away and I had to deal with all kinds of stuff. So we never ended up playing any more shows. And I got really sick shortly after that.”

Being laid up in the hospital and even now that he’s back home recovering has given Butler lots of time to think.

“The second I came out of the transplant a month ago, I felt awful because of the surgery, but I knew instantly that my symptoms were gone,” he says.

“So to be sitting there with nothing but time on your hands, you just start thinking about the future. And I’m definitely gonna be tuning up those guitars soon.”