SHEBOYGAN – When Abby Schroeder found out she was pregnant in January, she and her husband, Sam, were looking forward to welcoming their third child.

Their oldest son is 8 and their daughter is 5. This baby was going to break the tie. And Abby was looking forward to her maternity leave falling in September so she could spend one-on-one time with the new baby while the older kids were at school.

But when Abby was 12 weeks pregnant, Wisconsin declared a state of emergency because of the coronavirus sweeping the state and the country. Being a registered nurse at a local hospital, she was nervous about what work would look like.

When rumblings about the virus coming to the U.S. started early this year, Abby said she was trying to learn as much about it as she could, but so much was still unknown.

“As soon as you see those two lines on the pregnancy test, you want to keep that baby as safe as possible,” Abby said. “Can you do that with this virus?”

Inside a hospital while pregnant, during a pandemic

Before the pandemic, Abby worked in an outpatient division that specialized in digestive health procedures.

The hospital stopped all elective procedures when the virus first started to spread locally, and Abby said she will never forget the day they closed her outpatient division. It was a day she never imagined happening in her career.

Abby worked in a specialized area of health care, so going back to more generalized care was an adjustment because her specialty was so ingrained in her. She had to think back to what it was like before she specialized — a transition she never expected to make.

With her usual division closed, Abby began working with what they called the “PPE Brigade.” She would go around to the different departments and make sure they had all the necessary personal protective equipment and that it was being worn correctly. This seemed like a safe way for Abby and other employees at higher risk to keep working, since so much was still unknown about the virus, she said.

Switching to the PPE Brigade meant that Abby had to work second shift. When she would get home around 11 p.m. she would take her scrubs off outside, put them in the laundry immediately and then shower. At that hour, all she wanted to do was crawl into bed after working, but she also wanted to make sure she wasn’t bringing the virus home to her husband and kids.

Even as the virus spread and she got further along in her pregnancy, she kept working.

Abby said she felt safe at work. They had proper PPE and the hospital was following guidelines from the Centers for Disease Control and Prevention.

She couldn’t wear an N95 mask because her weight was changing from the pregnancy and it was hard to ensure that the mask was fitting properly. Instead, she wore a powered air purifying respirator, which looks like a space helmet.

“If a pregnant mama can mask up and do all that, I feel like the Sheboygan community can put on a mask so we can flatten the curve; so health care workers can do their job and not be overwhelmed; so my kids can go back to school,” Abby said.

In May, her outpatient division reopened. She was interacting with patients again, but everyone who came in got tested for COVID-19, which offered some comfort.

As the months went on and cases in Sheboygan County began to spike in July and August, Abby’s stress and anxiety grew, too. She was getting closer to delivering her baby and she wondered how she would keep him safe when he was born and no longer protected by being in the womb. 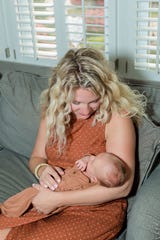 Abby Schroeder delivered her son, Crosby, on Sept. 9 after working during the pandemic at a Sheboygan hospital as a registered nurse. (Photo: Natalie Marie Photography)

Abby delivered her son, Crosby, on Sept. 9. It was bittersweet because the birth didn’t look like she thought it would, but giving birth in a pandemic had unexpected benefits.

She imagined her older kids running into the hospital room eager to meet their baby brother. Instead, it was just her and her husband. While it was hard not to share the moment with other loved ones, Abby was thankful for the one-on-one time with her new baby.

Sam wore a mask the whole time they were in the hospital for the labor and delivery. Abby wore one too, until she started vomiting.

The hospital tested her for COVID-19, which is now procedure for everyone giving birth, but she said it was particularly uncomfortable to deal with in-between already intense and painful contractions.

Since the rest of her family wasn’t allowed to visit, Abby said the nurses and her doctor felt like family.

‘Easier to protect him when I was pregnant’

It’s been almost two months since Crosby was born, and Abby said in some ways it is scarier now that he is out and potentially exposed to any germ or virus that comes through their house.

His infant immune system is still maturing, so the Schroeders have kept their close circle very small. Only the grandparents and Abby’s sister have been able to meet him.

It’s been hard to tell others that they can’t meet him yet, Abby said, but people have been understanding. And with a new baby in the picture, it is hard not to have a village of people able to support her in the ways they could with previous babies.

It can feel isolating not to have those people present with her through this. Abby is worried about protecting her baby, but she also wants to protect the grandparents from any germs her older kids or husband may bring home from school or work.

Sheboygan County’s coronavirus numbers have been spiking since the Schroeders brought Crosby home. Since he was born in early September, more than 3,800 new cases have been reported, 19 more people have died and total hospitalizations have more than doubled.

“It was easier to protect him when I was pregnant, than now with him in my arms,” Abby said.

Back to work, but this time without her baby

Come December, Abby will need to go back to work at the hospital. She will still be anxious that she could bring something home, but she plans on taking all the same precautions she did before she went on maternity leave.

Sam is going to stay home with the baby when Abby goes back to work, so she’s thankful he won’t need to go to a day care or other setting that could expose him to more people.

Abby wants her pandemic baby to know that his birth was a bittersweet time. Her pregnancy looked different than she originally thought it would, but it wasn’t without silver linings.

She had more one-on-one time with Crosby than she ever imagined simply as a consequence of social distancing and other precautions. They learned how to keep him safe after he was born.

As for her older children, Abby said preparing them to have another sibling included discussions like teaching them to wash their hands as soon as they get home or after every time they sneeze or cough.

The older kids are doing school at home since the Sheboygan Area School District decided to transition to all-online learning on Oct. 20. They were attending in-person because Abby said they needed it socially, but the district announced an extension to online learning because of the ongoing surge in cases.

Through it all, Abby said, the kids have been resilient. Wearing masks is second nature to them now and they are adapting well to every change that gets thrown their way.

More: When police respond to people in mental health crises, the outcomes can be fatal. Some departments are taking a different approach.