Ramirez is four months pregnant with her second child. She sells trinkets — everything from candy and gum to Mexican flags — mostly to people crossing the border. But there are few customers now and sales have declined by more than 70 percent, she said. She simply doesn’t know how she’ll make ends meet.

It’s been a little over six months since the U.S. and Mexico restricted the border to “non-essential” traffic to curb the spread of the deadly coronavirus. Most people who live, work and study on both sides of the Rio Grande are not crossing the border. Overall, traffic is way down. But many continue to cross despite not being on ‘essential’ errands. And COVID-19 is still out of control in both nations.

Rivera says she understands why the restrictions exist, but hasn’t figured out why only Mexican shoppers appear to be barred from crossing.

“Everyone says they’re coming across to see a dentist, or pick up medicine, visit families, but you see them in bars, restaurants, shopping. I don’t think that’s right,” she said. “It makes you feel less than. I should be happy that we at least have people, but deep down I just don’t think that’s right. If it’s no, it’s no. Period.”

The partial closure that began March 18 is disrupting the economy and the way of life of a once fluid region. Retail sales have plummeted. Student enrollment at some public and private schools has fallen as worried Mexican parents take their children, many who are U.S. citizens, out of school. International students living in Mexico aren’t sure they ever want to cross again, pointing to fickle CBP agents, who they say sometimes threaten to take their student visas away.

Critics say a poor understanding of how the border operates is leading to disastrous consequences. The border, said Laredo’s IBC Bank Executive Vice President Gerald Schwebel, “can’t take much more.” He blames politicians for being more attuned to partisan bickering than the economic realities of the border.

“I hate the word ‘essential’,” he said. “Every person, every shopper, visitor is essential and every extension is hurting small businesses that depend so much on the Mexican shopper. It’s crippling us.”

In El Paso alone, Mexican shoppers usually account for 10 to 15 percent of El Paso’s retail sales, according to research by the Dallas Federal Reserve. Over the last six months, the city has lost an estimated $100 million in retail sales, said Tom Fullerton, of UTEP Department of Economics & Finance, warning, “If the current longer wait time policy remains in effect through December, the merchant losses on this side of the border will be even greater.”

The governments of the U.S. and Mexico consider trade traffic — the goods that move back and forth to help fuel both nation’s economies — as ‘essential’ and therefore allowed to cross the border. Crossing is also allowed for healthcare and medicine. Tourism and recreation are non-essential and banned. Unauthorized immigrants are also being rapidly deported without traditional opportunities to have their cases heard,with the pandemic cited as the cause.

While big trade business continues and retail is disrupted, some individuals feel they’re being harassed when they cross for things supposedly considered essential like food, fuel and healthcare.

In July, Martha Rivera, 48, wanted to visit her 78-year-old mother who has cancer and was scheduled for heart surgery. She lives in Los Angeles. After asking her mother’s doctors for a letter explaining the situation, Rivera headed to the international bridge.

For three-days she pleaded her case with CBP officials, who finally relented and gave her a permit for 10 days.

“By then, I had gotten a call saying it was not too likely that I would make it in time to see my mom,” Rivera said. Then when she arrived in Los Angeles, Rivera was unable to visit her mother, who had by then tested positive for COVID-19. She’s still hanging on, but Rivera isn’t optimistic about seeing her again unless travel restrictions are lifted.

Landy Mendiola, 26, is one of those who don’t cross anymore, even though as a Master of business administration student at the University of Texas at El Paso she is considered “essential.” Last April, the Juarez student tried retrieving a book to study after classes went online. She says U.S. Customs and Border Protection authorities “bullied her,” threatened to take her visa away, saying her attempt to enter the U.S. was not “essential.”

“Because of that I stopped trying, the agent made me feel fear,” said Mendiola. “He told us that if we tried again, they would take away our visas. They threaten you. I don’t know if they can even do that, but they threaten you.”

Mendiola said she has no intention of returning to El Paso anytime soon. At least two other UTEP students, who didn’t want to be identified, faced similar experiences and have decided not cross again as long as the partial shutdown is in place.

Mendiola said she notified UTEP’s Office of International Programs, which apologized for the inconvenience but didn’t offer to help.

UTEP President Heather Wilson said she was unaware of the Mendiola case,

“Crossing the U.S.-Mexico border for educational purposes is allowed as an essential activity,” she said. “If any UTEP student is having problems, they should contact us immediately and we will help them.”

CBP Spokesman Roger Maier said education is considered “essential,” but added: “Without any other details we cannot look into the allegation or possibly address something that may have happened in April.”

Mendiola said she did not file a complaint because she was frightened.

Last week, the Mexican government said restrictions — which doesn’t affect air flights — will continue until at least Oct. 21, even as the U.S. State Department lowered its travel advisory for Mexico to a Level 3 from the highest warning on the scale at Level 4. The change is just in time for fall, when many Americans head south to get away from winter.

Despite the measures to fight COVID-19, the pandemic remains entrenched on both sides. As of Thursday, El Paso has recorded 23,207 cases and nearly 508 deaths. In Juarez, deaths surpass 849, with 7,154 confirmed cases.

“In Juarez, most people cannot quarantine because if they don’t work they won’t eat,” said Howard Campbell, border anthropologist and author of the upcoming book, Juarez Underworlds. “So there does not seem to be an end in sight to the pandemic in El Paso and Juarez.”

For now, border residents are doing what they’ve done for generations: Using their resilience and creativity to get by.

Rodolfo Felix, 20, is studying medicine at the Juarez campus of Universidad de Durango. He and his family are U.S. citizens and are continuing to cross the border with no problems.

But he adds, “We have a lot of friends and family who unfortunately can’t cross. For that reason, a lot of them have asked us to cross things that they need for their businesses or even personal things,” such as medicine, milk and eggs.

At the foot of the Stanton Bridge in downtown El Paso, the colossal Aguacero sculpture by Mexican architect Enrique Carbajal, better known as Sebastián, overlooks the landscape. It’s name means Downpour in English, and it stands as a tribute to two nations weathering storms.

The area around the sculpture lately serves as a repackaging place for shoppers who buy in the U.S. and take the goods to homes in Mexico. They take their goods out of shopping bags — mostly food and medicine that is cheaper or of better quality than what’s available in Mexico — and stuff them inside suitcases that are easier to roll for the long walk across the pedestrian bridge. They hope, too, that they will not be questioned by Mexican customs officials. What they bring across the border is legal, but trust is in short supply.

“We have to find a way to help each other,” said Marisol Marin, 30, a U.S. citizen who lives in Juarez. “Because our friends and family can’t come here.” 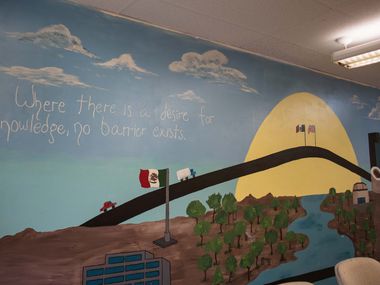